Seabrook Island Birders participated in the nationwide Audubon’s Great Backyard Bird Count (GBBC) on February 17th through the 20th. In addition to members reporting their sightings in their own backyard, 36 individuals also joined at least one of the five bird walks scheduled on Sunday February 19 and Monday February 20 at various venues around Seabrook Island.

Sunday morning started at 8:30 am with the group car pooling along Jenkins Point to check out various lagoons and vistas. Among the 28 species seen, the group enjoyed watching a Yellow-throated Warbler have breakfast on a pine cone. 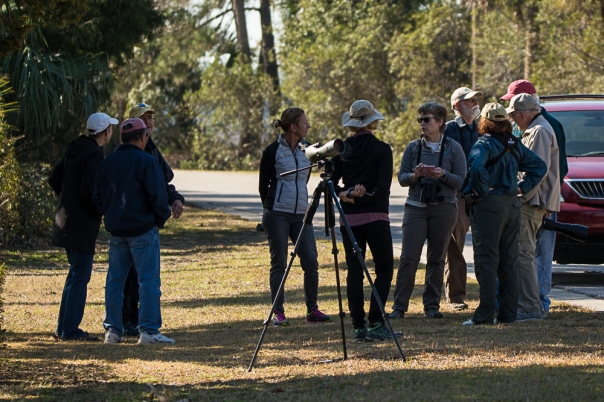 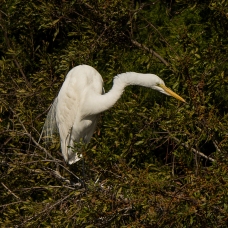 The next walk was at Palmetto Lake and the Lake House. An Osprey crossed overhead multiple times to allow good views of banking and turning. Nineteen (primarily juvenile) White Ibis also flew overhead. Two Black-crowned Night-Herons and a Green Heron were near the water to provide a better view as were the Pied-billed Grebes and Double-crested Cormorant. Not to be outdone by their feathered friends, two alligators posed intertwined on the platform with five yellow bellied sliders basking on the alligators’ backs in the sun. 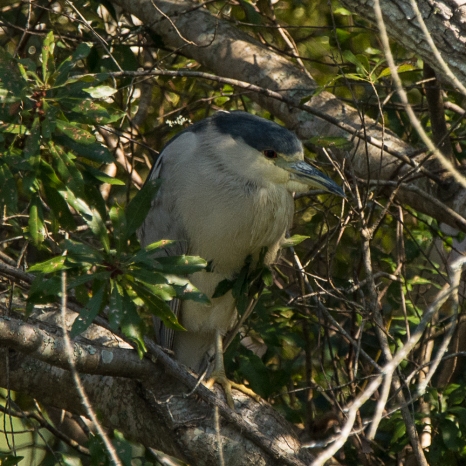 Green Heron on the bank of Palmetto Lake – Charles Moore

SIB members at the Lake House for the GBBC – Ed Konrad 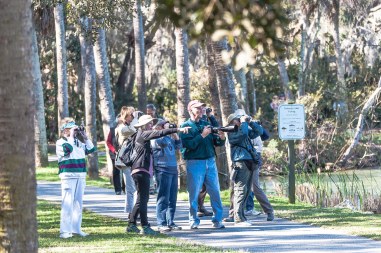 After a brief break, the third walk was along North Beach. Not surprising, a different variety of birds was seen on this walk. It would be hard to pick a highlight of this walk but the Northern Gannet in the distance as well as closer views of Horned Grebe, Dunlin and 42 Lessor Scaup were all crowd pleasers. Of course seeing banded Piping Plover and American Oystercatchers were also winners.

Piping Plovers on North Beach including one with “jewelry” – Ed Konrad

Sunday ended with a walk starting at the Equestrian Center and proceeding to the Garden and Maintenance Area. Eastern Bluebirds abound but bigger birds stole the show. Twenty-six (26) Wild Turkeys were gathered in one of the pastures. A Red-shouldered Hawk flew overhead then posed in a tree for pictures. As the group was leaving the Equestrian Center, a screech alerted of more activity and a picture of a pair of hawks mating was able to be captured. Continuing the big bird theme, a view into the holding pond past the maintenance area resulted in not only 25 Bufflehead but a rarer Common Goldeneye.

Common Goldeneye (which aren’t that common!) along with Bufflehead on the water treatment pond – Ed Konrad

A beautiful Pine Warbler at the Equestrian Center – Ed Konrad 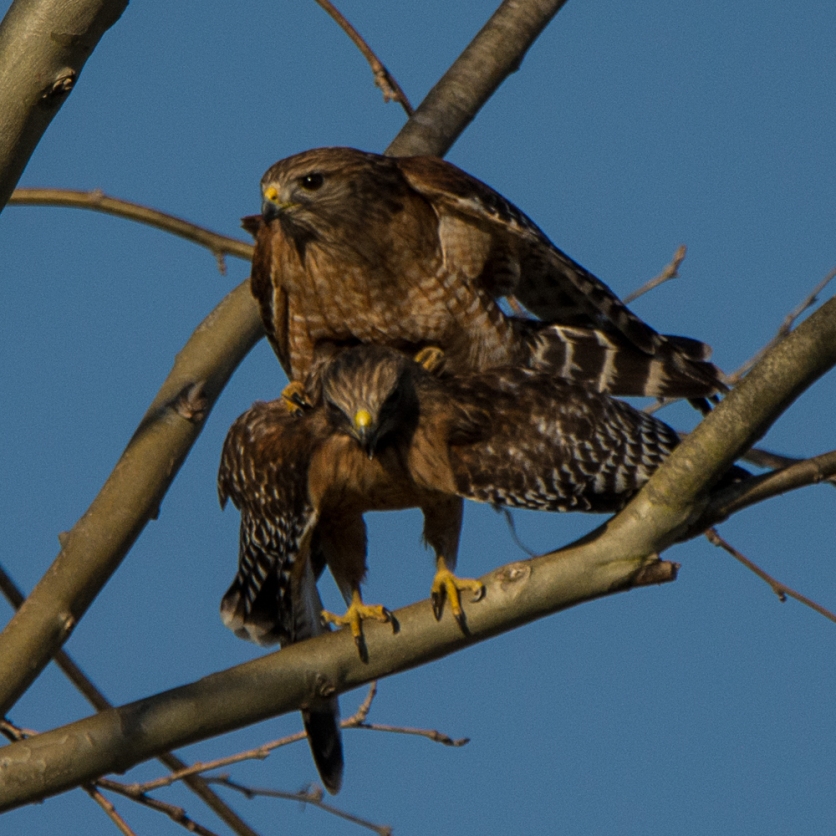 Monday ended the fabulous weekend with a “walk” in golf carts along the paths of Crooked Oaks Golf Course, closed to golfing for the day for maintenance. The 19 participants split in to two groups for a friendly competition regarding who could find the most species. One group started at 18 and went backwards on the course while another started at one. Sightings were shared when the groups met at the Bald Eagle’s nest on the hole #3. Unfortunately the Bald Eagle was not visible at that time but when one of the groups returned later, a mature eagle was watching over from above. A weekend high of 38 species was seen that morning with favorites that included the Wood Stork who appeared to be guarding over a 7 foot alligator along with the eagle mentioned above and an Eastern Towhee ground feeding near a feeder on the 17th hole. 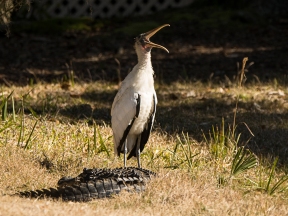 “Best friends – for now!” Wood Stork sitting next to an American Aligator 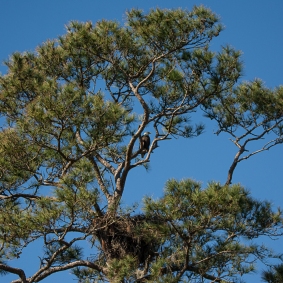 “Which way did he go?” Double-crested Cormorants – Valerie Doane

Even at 9-years old, our youngest birder of the day had a fabulous time and even demonstrated the difference between a Turkey & Black Vulture – Ed Konrad 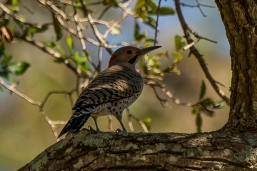 Each walk saw American Crows (no surprise) and Yellow-rumped warblers with most walks reporting Carolina Chickadees and Tufted Titmice. The total number of each species by walk is shown below. A great weekend of contributing to citizen science and the Great Backyard Bird Count.