Aside from the Carolina Chickadee, this is probably the most likely visitor to a backyard feeder on Seabrook Island. It is silvery gray with a soft-colored orange just below its wing. It is a small bird but appears considerably bigger than a chickadee when they are next to one another, which they often are. Its crest is a good field mark.

During the summer months, titmice feed on insects but in the winter, they are particularly fond of sunflower seeds, and the bigger the better. If you have a feeder in your yard, you can watch as the titmouse picks out a large seed, holds it between its feet and pecks on it vigorously until the seed cracks open to release the tender heart inside. They are quite brave and will come to a feeder that is placed on a window providing a wonderful view for the homeowner.

The titmouse has a big sound for such a small bird. His main song sounds as though he is calling in a two-note descending minor third (for you musical folks) which is repeated usually three to four times: Peter Peter Peter. It’s a full, rich sound and quite distinguishable once you are familiar with it.

As the map below indicates, the Tufted Titmouse is here all year long. They build their nests in pre-existing tree cavities or sometimes in a bluebird box. They are quite territorial such that, even when breeding is finished, the male and female remain together and do not join with others as the chickadees do.

Watch for these little guys. They are not the biggest or the brightest (color, that is) but they grow on you! View this short video from Cornell Lab of Ornithology to see the Tufted Titmouse. 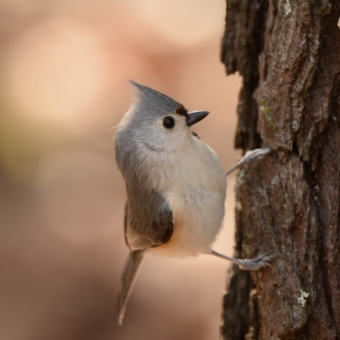 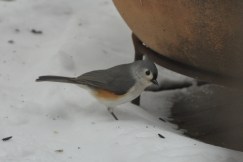 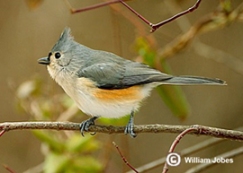 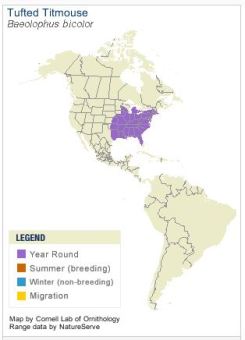