Another plover? Seabrook Islanders have heard a great deal about the Piping Plover but there are several other plovers that also appear on our beaches: the Black-bellied, the Semipalmated and the Wilson’s.

The Black-bellied is considerably different from the other three and is here predominantly in the winter. The others are smaller birds and they resemble one another so much that they are sometimes difficult to tell apart. As with many birds, they change color slightly seasonally and gain or lose breeding plumage which just adds to the confusion.

This week we are focusing on the Wilson’s Plover. Named for an early ornithologist, Alexander Wilson1 this bird is the largest of the three at between 6-8”. Note its bigger, thicker beak relative to the two other plovers. Additionally, its breast band is wider. When it stands on the beach, it often assumes a more upright position – although not always.

While most of the Piping and Semipalmated Plovers are on our beaches in the winter and migrate north to nest and raise their young, the Wilson’s is here in the spring and summer and nests here on North Beach. It lays its eggs on the beach.   As you can see from the pictures below, the eggs are right in the open yet so well camouflaged that they are barely detectable. Can you even find them in the first picture? They are more obvious in the second close-up picture, taken at a different angle. It’s clear why the eggs can be so easily stepped on by beach goers. Fortunately, these birds often choose nesting areas away from the immediate shoreline, areas where people are less likely to walk. When aroused off of its nest, the bird will call with a sharp, liquid quit or queet to warn intruders. 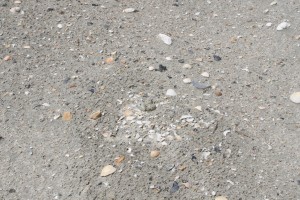 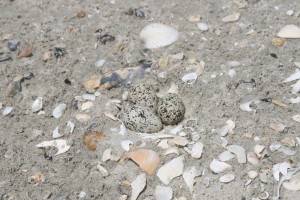 A closer look at the Wilson’s Plover eggs.

Because of its larger, stronger beak, the Wilson’s Plover tends to search for and devour larger creatures than the smaller plovers. Typically, it will run a few steps forward, pause, then run again, probing the ground in search of something edible. It likes crustaceans, worms and insects as well as small mollusks.

The oldest recorded Wilson’s Plover was at least six years old according to it’s banding history. It was a male that was recaptured in South Carolina and then released.

The Wilson’s Plover population, like that of many shore birds, is declining. This is not surprising considering the vulnerability of its nests. It is in the highest category of the 2014 State of the Birds Watch List which includes those birds that are at risk of becoming endangered or threatened in North America.  As you walk along North Beach just past the dog “off-leash” area, you will notice new signage has been placed to ensure the nesting areas for both the Wilson’s Plover and the Least Terns are protected.

1 Wilson had several other birds named in his honor. These include Wilson’s Snipe, Wilson’s Warbler, Wilson’s Phalarope, and Wilson’s Bird-of-paradise. The snipe and warbler may be seen in SC, the phalarope is rare and the bird-of-paradise is an Indonesian endemic.

(See the range map following the photographs below.) 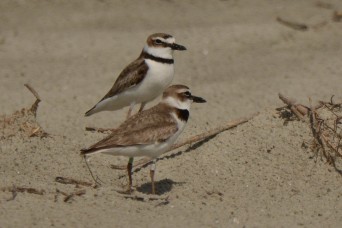 A pair of Wilson’s Plovers on North Beach – Ed Konrad 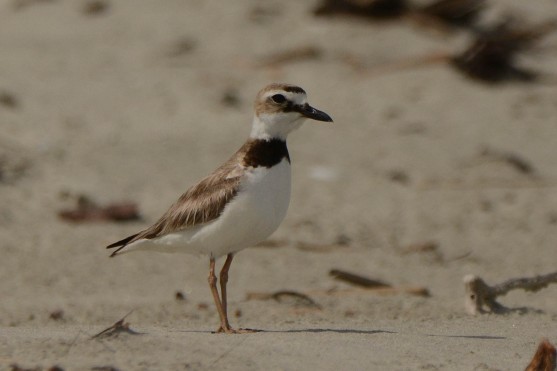 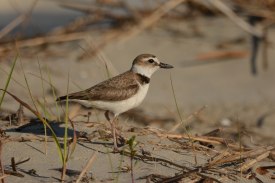 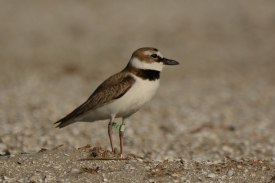