This morning (Friday October 25, 2019) we looked out on the marsh and found 10-12 young White Ibis feeding. Location is the marsh just up from Cattail as you cross over the bridge.

To learn more about White Ibis, visit All About Birds. 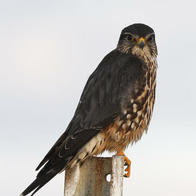 “Over the last couple of years I’ve seen this bird most mornings at dawn sitting on the first dog sign at north beach.”

On Sunday morning, Glen Cox notified several members of SIB’s executive board of his “First of Season” (FOS) sighting of Hooded Mergansers.  He spotted them at the marsh on Captain Sams Road near the fire station on Seabrook Island. You can learn more about this beautiful bird by reading our blog from two years ago comparing the Hooded Merganser vs the Bufflehead.

Our winter birds are returning, so be sure to let us know when you see FOS birds on Seabrook Island so we can let our members know who is arriving and where they can be seen!

Use this link to Report a Bird Sighting and if possible, send a photo to our email:  seabrookislandbirders@gmail.com.

Carl Voelker, a SIB board member, took the photos above from his deck overlooking the marsh and wanted to know what bird these were.  The answer: they are Whimbrel.  A common shorebird found wintering in tidal flats and shorelines and occasionally visiting inland habitats. On Seabrook Island, they’ve been seen on North Beach, the mudflats on Jenkins Point Road, the mudflats across from Bohicket Marina, and like Carl, maybe even your backyard.

While we’re talking about Whimbrels, we wanted to share a great website called BirdNote.org.  BirdNote is a daily two-minute radio show that combines rich sounds with engaging stories, to illustrate the amazing lives of birds and give listeners a momentary respite from the news of the day. It even has the transcript available if you are hearing impaired or prefer to read text.  Here is an example of their show on Whimbrels.

You can access these podcasts through iTunes, a podcast feed or by downloading. If you need a reminder like me, you may want to sign up for the weekly BirdNote Newsletter which is a preview – including photos – of the following week’s shows. Or simply explore their website:  https://www.birdnote.org/

Register for one or both of our great events this week!

SC DNR has reported seeing over 1000 Red Knots on Deveaux Bank, and the numbers are increasing as they migrate north. Ed and I recently spotted 300 Red Knots about 30 minutes after a high tide. They were feeding on the shore where it bends towards the end of North Beach, one of their favorite spots. A flock of knots was also on a sand bar. As the tide fell, they all moved to the sand bar. As we walked back, we spotted a smaller group of knots in a flock of Willets to the right of Boardwalk #1.

A few knots were beginning to turn reddish. Four had bands, two were readable, #512 and #1C1. In looking at our photos of banded Red Knots, we spotted 1C1 last February too! Per the website to report and track banded birds (bandedbirds.org), 1C1 has also been reported at Kiawah Island in 2012, and at Pawleys Island and Murrells Inlet in 2015 and 2016. 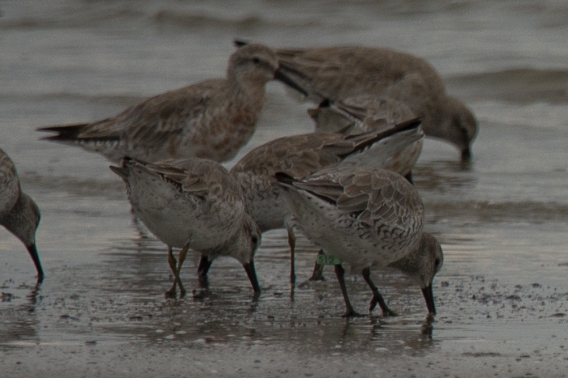 Red Knots have one of the longest migrations of any bird, 18,000 miles round trip from the tip of South America to the Arctic where they breed. From March to early May, Seabrook Island is an important stopping point for them to feed and rest on their long journey north to breed. Last year we had estimated 5000 Red Knots on North Beach at their peak in late April. Knot population on the East Coast has declined 85% since 1980, and they are “Federally Threatened” under the US Endangered Species Act.

Throughout the winter, we usually see Piping Plovers when birding on North Beach. They’re usually in small groups of two to five, feeding along the shore. Some are banded, and we report and send photos of these to biologists at the Virginia Tech Shorebird Program, and University of Minnesota Great Lakes Piping Plover Team, for their research.

We’ve had two recent banded Piping Plover sightings on North Beach that we reported. We learned that one was banded by researchers from State University of NY (SUNY) as a one-day old chick in June 2017, at North Brigantine Natural Area in New Jersey. Ed and I have spotted this Piping Plover twice: this February, and in August 2017 as was migrating south from the Atlantic area breeding grounds. 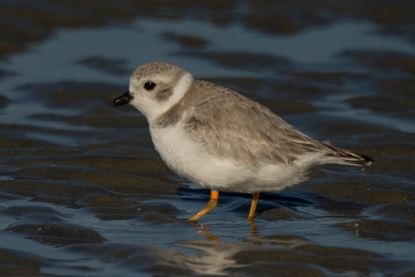 The second banded Piping Plover we’ve spotted three times: This February, and last November and February. Researchers tell us it was banded on Kiawah Island in 2012, and breeds on the coast of New Jersey. These little guys look to be making themselves right at home as they spend winters with us! 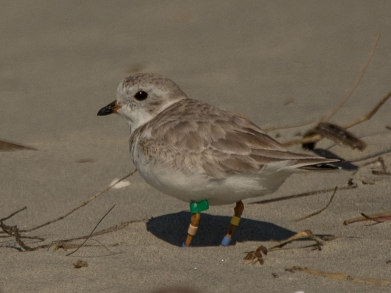 Piping Plovers breed at Great Lakes, Atlantic, and Great Plains areas from April to July. In late July they migrate to southern coasts and the Caribbean to winter until the next spring. Seabrook is an important wintering and migratory site, offering a quality foraging and roosting habitat important for adults to survive and return to their breeding sites. Populations and breeding habitats have drastically declined due to threats of development, people, dogs, predators, weather, and environment. Great Lakes area Piping Plovers are “Federally Endangered”, with only 76 breeding pairs recorded in 2017. Atlantic area Piping Plovers are “Federally and SC Threatened”.

So, look for, and please respect, these endangered and threatened birds that are our guests during their important migration and wintering on North Beach!

Ed and I will lead a SIB bird walk at North Beach to look for the Red Knots, Piping Plovers and other shorebirds on Thursday, March 29. We’ll meet in the Property Owners’ beach parking lot at 8:30am, about an hour after high tide. We’ll be walking to the inlet, and hopefully the knots will begin feeding as the tide falls. RSVP now!

On Thursday, January 4,  a day after Snowmageddon 2018, Ed and I went out for a walk around Palmetto Lake and nearby areas. It was a beautiful sunny morning and we found some interesting bird activity. We were surprised to find many birds feeding on the snowy ground. A Blue-gray Gnatcatcher hopped along the snow and fluttered close to the ground, obviously finding some goodies. Nearby a Ruby-crowned Kinglet did the same and a bit down the path, an Eastern Phoebe. In the palmettos, Eastern Bluebirds were beautiful against the icy branches. And in a nearby Wax Myrtle, Yellow-rumps chipped away, perching on an icy limb. 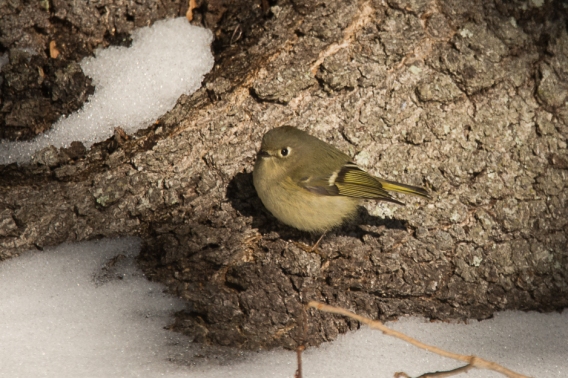 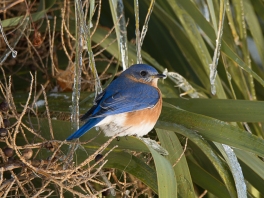 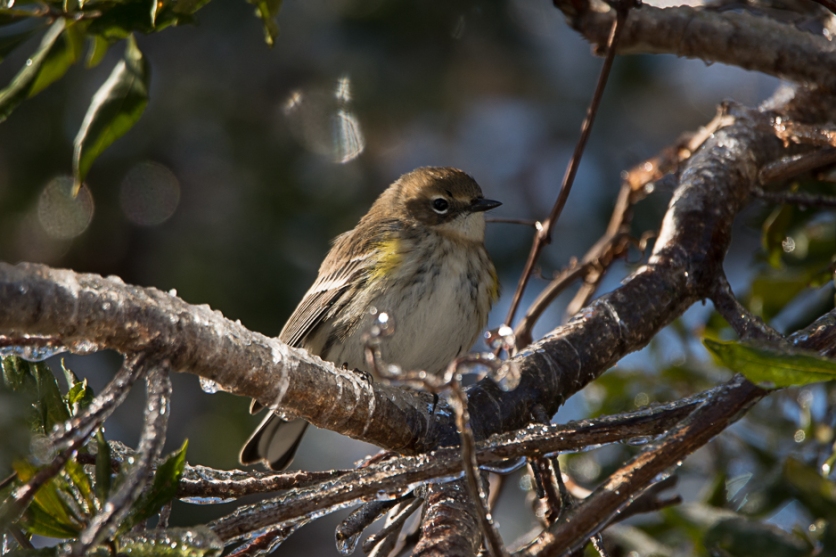 END_OF_DOCUMENT_TOKEN_TO_BE_REPLACED

The Reddish Egrets are here on North Beach! One was spotted by David Gardner on Friday, June 30. That night, Aija and I spotted two Reddish Egrets on Kiawah East Beach, an adult and an immature. On Saturday, July 1, Aija spotted an immature Reddish along the Ocean one half hour before low tide at the far end of North Beach. I photographed it for an hour as it did it’s beautiful fishing dance, moving through the tidal pools from near the ocean, across the wide low tide beach, and to the shore by the “no dogs allowed” sign.

Aija then spotted a second immature Reddish Egret in her scope at Beachwalker Park. This Reddish then flew across the channel to Seabrook, and was joined back out at the ocean by the one I had been photographing. So, there are at least three Reddish Egrets, these two immature birds, and the adult we saw at Kiawah East Beach.

The immature Reddish Egret is a paler ashy-gray color. An adult Reddish Egret is more distinctive in color, with clean gray body and shaggy reddish neck. There may be a Tricolored Heron also fishing in the tide pools, and it has a white stripe on the neck and white under wings and on body.

The Reddish has a wide variety of feeding behaviors: running through shallows with long strides, staggering sideways, leaping in air, raising one or both wings as a canopy to shade schools of small fish seeking shelter in the shade, and abruptly stabbing at fish.

We did not see a Reddish on Monday, July 3. But keep looking. It should be on North Beach possibly through September. 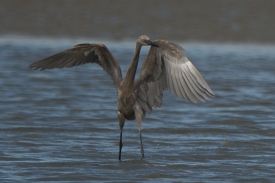 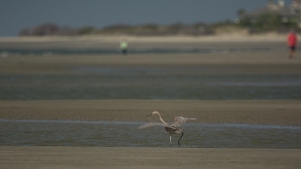 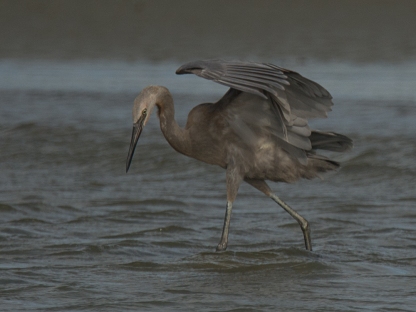 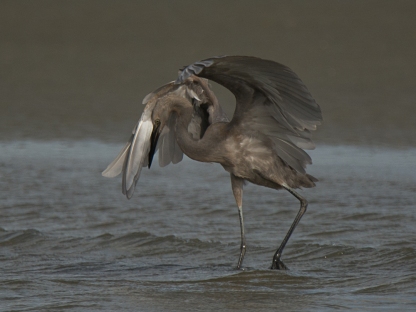