American Robin – Turdus migratorius
Length:  10″; Wingspan: 17”.Although generally this bird is thought to be a sign of spring in the more northern sections of North American, during the winter this migratory bird loves to hang in the warmer areas of the South gorging on our berries!

The Robin is among the most abundant bird species on the continent, with a population estimated at more than three hundred million. It lives in almost every habitat, from forest to tundra, from Central America to north of the Arctic Circle, from sea level to 12,000 feet.

The American Robin was mistakenly named after its smaller, orange-breasted European namesake by Early American colonists. The American Robin is not in the robin family but is actually a thrush, part of a group of songbirds that includes bluebirds, veeries, hermit and wood thrushes.  These birds often possess attractive plumage, spotted breasts (particularly in the young) and insectivorous diets. At ten inches long, the robin is the largest of the American thrushes and is often used to describe and judge sizes of other birds since it is so commonly recognized. Its orange breast sets off a black tail, a black head with white around the eyes, a yellow bill, black-and-white-streaked throat, grayish brown back and white undertail.  Male colors are bolder than those on the female and, true to form, juvenile robins have spotted breasts.  Look carefully the next time you see a robin and you will notice what a beautiful bird it is!

With autumn comes a southward migration, although some robins can be found wintering in even hostile climates, eating the berries remaining in wooded, densely vegetated areas. According to Lex Glover, a S.C. Department of Natural Resources wildlife technician, the population of robins in South Carolina swells each fall and winter, as robins move in from the northern states and Canada, sometimes on their way to Florida and the Gulf States.

“We can have pretty intense flocks of them, scattered through the coastal plain,” he says. “When we do Christmas counts, you’ll see large numbers of robins either first thing in the morning or the last thing in the evening, often going into bottomland hardwood areas where there is plenty of cover, and maybe cedars and evergreens so they have a place to roost. I have also seen them in plowed fields, with sparrows and blackbirds mixed in with them.”

Just before the New Year, one of our members, Ellen Coughlin, sent us the picture below to ask us to confirm the identification of the birds.  She said, “They were in the back yard and over the lagoon as well as fighting over the bird bath on Dec. 23.  There were easily 100-150 of them.  Flying around like they were drunk.  This is the second time this event has occurred.  The last time the birds were red winged blackbirds and it was about three years ago.  Same weird behavior, diving bombing us as we stood on the enclosed screened in porch.”  As you might remember from last weeks blog on Cedar Waxwings, some birds eat so many fermented berries they become “drunk.”  According to the Cornell Lab of Ornithology website, ” When Robins eat honeysuckle berries exclusively, they sometimes become intoxicated.”

In fact, just days before Ellen’s email, a birder staying at his parent’s house on Bohicket Creek reported, “I watched flocks of robins flying from Wadmalaw Island to Johns Island at dawn, and then again from Johns Island to Wadmalaw Island at dusk. I would guess the flyway was about a half-mile wide, so I couldn’t monitor the whole thing, but multiple estimates of the number of robins passing overhead in my binocular’s field of view led me to a count of 300 per minute for 40 minutes (the flight lasted somewhat longer) for a report of 12,000 robins.  I’m confident that estimate is low, though it’s easy to over-estimate the number of birds for species that fly in loosely-organized flocks.”

Keep your eyes and ears open for these common winter birds on Seabrook Island.  We are still seeing flocks of them flying overhead or eating berries atop trees and bushes throughout the island! 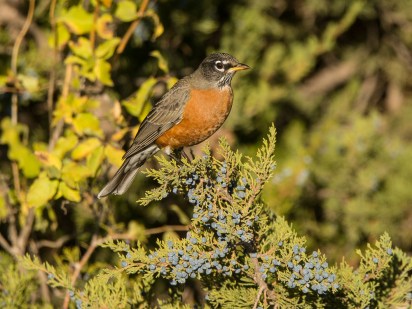 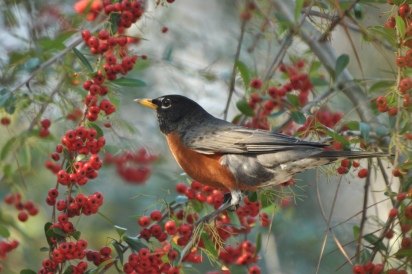