Residents are reporting an increase in sightings of Eastern Wild Turkeys on Seabrook Island. The domesticated version of this large native game bird is well known because of its role each Thanksgiving day. Millions of turkeys are drawn from an outline of the hands of elementary children prior to Thanksgiving each year.

The turkey would have been our national bird if Benjamin Franklin had had his say. He thought the eagle was beautiful but a lazy thief as it frequently stole its dinner from the industrious Osprey.

Native Americans first domesticated the wild turkey hundreds of years ago. Spanish explorers took turkeys domesticated by the Aztecs back to Europe around 1500. The pilgrims brought turkeys across the Atlantic to the New World only to find them already here. These European settlers called them “Turkey birds” because they looked like African guinea hens from Turkey and the name stuck.

The wild turkey population in the southeastern U.S. was decimated from 1900 to the 1950’s due to hunting, pesticide usage (DDT) and habitat loss. During this period, the only wild turkeys remaining in South Carolina occurred in the Francis Marion National Forest and along the Savannah River.

The South Carolina Department of Natural Resources and the National Wild Turkey Federation launched one of the nation’s most successful conservation restocking programs during the 1950’s. Descendants of these few remaining turkeys abound today in all of South Carolina’s 46 counties and in every Southeastern state. Wild Turkeys are hunted in 49 of the 50 states with Alaska being the only exception.

Large males are called toms, weigh between 10 and 24 pounds and mature females, called hens, weigh between 5 and 10 pounds. Mating behavior begins in early spring with Toms attracting potential hens through gobbling and strutting about with their feathers puffed out, tail feathers spread, wings dragging on the ground and making low “drumming sounds”. The gobbling may be heard more than a mile away. A dominant Tom may attract eight to 10 hens to his harem.

Turkeys nest on the ground in shallow dirt depressions surrounded with woody vegetation. In South Carolina, laying of eggs begins in March and a clutch may contain as many as 18 eggs.  Eggs hatch in 28 days and the hatchlings are out of the nest looking for food within 24 hours. Hatchlings are called poults and adolescents are jakes

Turkeys sleep in trees but spend most of their time on the ground searching for food. They can run nearly as fast as a human track star at 25 miles an hour and may fly distances up to half a mile reaching speeds up to 50 miles an hour.

Wild turkeys are omnivores eating seeds, nuts, roots, berries, grasses, insects, small amphibians and reptiles. They are most active and feed primarily in the early morning and late afternoon.

Foxes, opossums, raccoons, skunks, snakes and many other animals pray on the eggs and poults. Predators of adult wild turkeys include foxes, coyotes, bobcats and large raptors such as eagles, owls and hawks.

Domestic turkeys are genetically distinct from wild birds. Ever wonder why domestic turkeys are white? Domesticated turkeys are bred to have white feathers because their pinfeathers are less visible when the carcass is dressed. Whereas, domestication has resulted in bigger, heavier birds with more breast meat, their natural survival skills have been greatly diminished. The wild turkey is a savvy, very wary, and intelligent bird whereas their domesticated relatives, well lets say, their elevators don’t go all the way to the top. 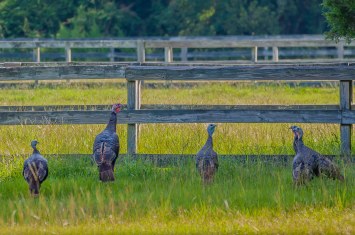 A “posse” of Wild Turkey at the horse pasture – C Moore

A turkey hen feeds along the forest edge. C. Moore

A turkey hen looking over a field of grass. C. Moore