There are two species of night heron both of which are found on Seabrook Island and throughout much of the South Eastern United States; the Yellow-crowned and Black-crowned Night-Heron. A third species, the Bermuda Night-Heron, was endemic to Bermuda but became extinct about 100 years ago through human activity.

Both Night-Heron species are medium sized birds and are one of the smallest herons at about 24 inches high and weighing approximately two pounds. Females are slightly smaller than males.

The adults are easy to distinguish. The Black-crownedNight-Heron has a black crown, black back, grey and white body, red eyes, and short yellow legs. The Yellow-crowned Night-Heron’s body and back are smooth grey-blue, it’s head is black and glossy with white cheeks and a pale-yellow crown that extends from the back of its head between the eyes to the bill. Long thin white feathers extend from the back of the crown of both species during mating  season

As their name implies they are both active primarily at dusk and during the night.

They are both found in vegetated areas associated with shallow waters. They seek out both saltwater and fresh water areas such as marshes, lagoons, swamps, streams, lake shores and areas that are regularly flooded.

Foraging mainly at dusk and during darkness, the primary diet of both Night-Heron are crabs, crayfish, other crustaceans, insects, worms and small fish.

They both spend daylight hours perched on tree limbs and bushes generally over the water hidden by foliage.

Both birds nest in trees when available, often in small colonies, with both parents participating in nest building, laying 2 to 6 eggs. The young stay close throughout the breeding season. 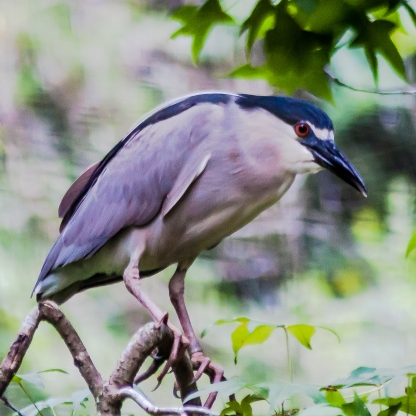 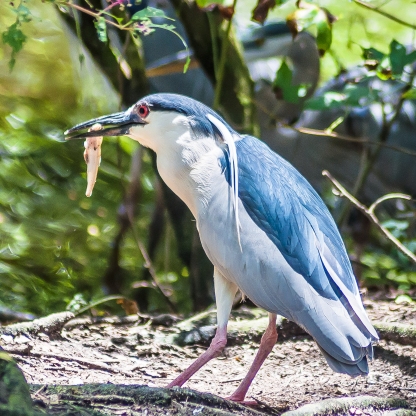 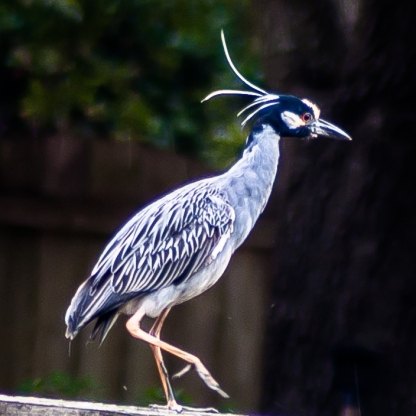 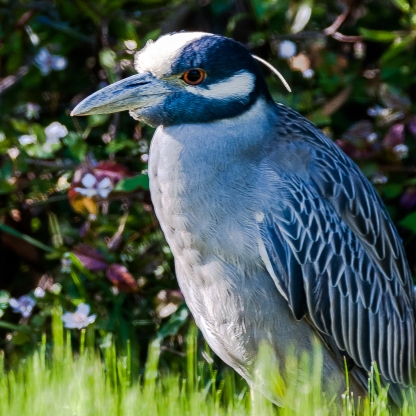 The juveniles of both Night-Heron look nothing like their parents, often appearing larger that the adults and are so similar in appearance it is very difficult to distinguish the two species. Juveniles take up to three years to obtain adult plumage. 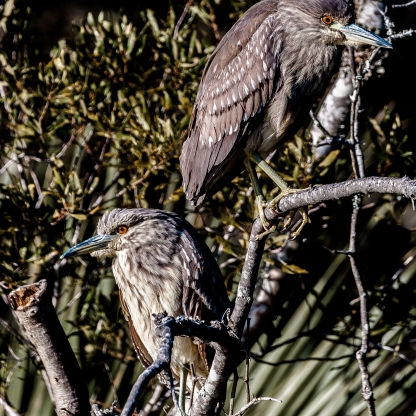 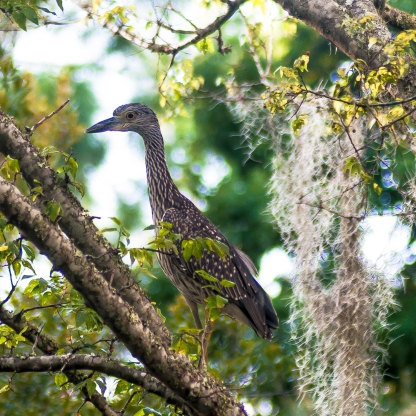 Black-crowned Night-Heron juveniles often sit hunched over, appear thicker bodied, the wings are brown with large white dots and the bill is a slightly thicker and is dark on top and greenish yellow on the bottom. The Yellow-crowned Night-Heron juvenile appears slender, stands taller, has numerous small white dots on its wings and its bill is nearly black. However, as they are far more similar than different it is very difficult to distinguish the juveniles of these two night herons.