Yellow-rumped Warblers are one of the most common warblers in North America and abundant on Seabrook Island from fall through spring.  The Yellow-rumped Warbler is sometimes referred to as “Butter Butt” due to its bright yellow rump.  It was formally called Myrtle Warbler in the East because it is the only Warbler able to digest the wax-coated berries of the Wax Myrtles.  On Seabrook, Butter Butts are our most obvious and widely distributed winter Warbler.  They arrive in November and depart in April.  You will see them in small flocks in open woodlands and brushy habitats.  This bird constantly “chirps” which is a contact call that keeps the flock together.

The Yellow-rumped is medium-sized warbler with a long narrow tail and stout dark bill.  In winter, the females, males and young are a paler streaked gray-brown, have bright yellow rumps and usually yellow side patches.  In the spring before they leave Seabrook Island, the male is dark blue-gray upper parts; white throat, breast and belly are white and heavily streaked with black.  Its rump, crown and small area at the sides of the breast are yellow.  There are two broad white wing bars. The female is brownish with the similar patterns.

In winter, Yellow-rumped warblers can be found in open pine and pine-oak forests and dunes where bayberries are common.  During this time they mainly eat berries and fruits, particularly wax-coated berries of bayberries and wax myrtles.  This bird has unique gastrointestinal traits that allow it to subsist on this unusual food source.  This makes them a very winter hardy bird allowing them to winter farther north than other warblers.

In the spring/summer these warblers are found in mature coniferous and mixed coniferous-deciduous woodlands feeding on insects including caterpillars, ants, leaf beetles, grasshoppers and spiders.  You might see them acting like Flycatchers as they leap off perches flying up to catch a passing insect.  They also eat wild seeds from beach grasses and goldenrod and may come to feeders to eat sunflower seeds, raisins, peanut butter and suet.

Yellow-rumped warblers are active and noisy birds.  They constantly chatter as they forage.  Their flight is agile and swift and the birds often call as they change direction.  Their yellow rump and white tail patches are very noticeable while flying.  Their song is a loose trill, but rising in pitch or dropping toward end and the call note is a loud “chek.”

A group of warblers has many collective nouns, including a “bouquet”, “confusion”, “fall”, and “wrench” of warblers.

(click on a photo to view as a slide show) 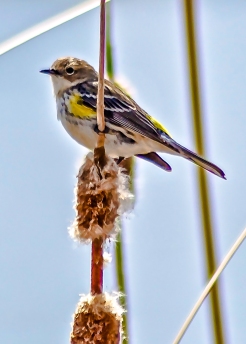