On March 27, Matt Johnson, Director of Bird Conservation & Engagement for SC Audubon, fascinated 63 SIB members and guests with a discussion of conserving the Prothonotary Warbler – “the Canary of the swamp.”

Prothonotary Warblers are migratory, spending April to September in southeast swamps like Francis Beidler Forest. In winter they travel thousands of miles to Central and South America. “Prothonotary” comes from official scribes in the Catholic Church who long ago wore bright yellow hoods, as this bird does.

The Prothonotary Warbler is the eye-catching songbird of the Southeast bottomlands. It’s personable, not as apt to fly off as other species, and seems to be almost curious as people approach. They weigh about half an ounce and belt out a strong song in the forest of “tweet-tweet-tweet-tweet”. Population has declined by 40 percent since the 1960s, as preferred breeding habitats of swamps and forested wetlands have dwindled due to development. 20% of Prothonotary Warblers worldwide need SC habitat to survive.

The Francis Beidler Forest is an Audubon wildlife sanctuary in Four Holes Swamp, a blackwater creek and swamp system of over 16,000 acres. Its crown jewel is 1,700 acres of old growth Bald Cypress and Tupelo forest. A 1.75-mile boardwalk lets visitors see the cypress-tupelo trees up close, many of which are over 1,000 years old. This is one of SC’s most sacred landscapes, preserving a precious habitat for 160 species of birds, including the Prothonotary Warbler. They nest in holes in trees such as cypress “knees” at Beidler, rather than in the open, which is unique among eastern warblers.

Matt discussed Project PROTHO, that he leads at Francis Beidler, to band, track, and research Prothonotary Warblers. “PROTHO” is an acronym for “Protecting Resident Ornithologically Tantalizing Hole-Dwelling Occupants.” Matt said the name always brings a laugh, but the project has a serious mission: identify local birds, their habits and territories so they can be protected.

Prothonotary Warblers are banded with unique colors to identify individual birds, and to study habits and needs to better focus conservation efforts. Visitors at Beidler can participate in banding and are encouraged to help monitor the birds as they walk the 1.75-mile boardwalk. “We can learn a lot about prothos’ behavior from the visitor information,” said Matt. “It’s a good way to engage visitors as it’s such an iconic bird and they’re so easy to see and hear.”

Matt told the amazing story of “Longshot”, the first protho with a geolocator. The next spring, while leading a group of visitors through the forest, Matt spotted Longshot who had come home! From the data on Longshot’s geolocation device, SC Audubon learned that when this little guy left Beidler he flew 5,000 miles south to Colombia, before returning home to within 10 or 15 feet of where he lived the previous year! Migration is the most dangerous part of a bird’s life, so to think this same bird returned to the same spot the following year is nothing short of amazing! Hence the name Longshot! 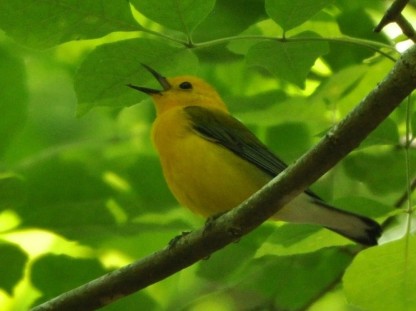 Since the success of Longshot, several Prothonotary Warblers have been fitted each year with geolocators as a part of Project PROTHO. In addition to providing vital nesting habitat in Beidler Forest’s sanctuary, SC Audubon continues their tracking to learn more about these beautiful yellow songbirds. From the data recovered to date, Matt has discovered that each bird traveled to Colombia, like Longshot, before returning to Beidler Forest, often to the exact same spot, the next year!

A follow-up SIB bird walk with Matt at Francis Beidler Forest was held on April 11 to observe and experience this amazing Prothonotary Warbler story. Watch for this article and photos later this week. Thank you Matt, for sharing this story, critical project, and your passion with SIB members!