Ed and I spent last week catching up on some Low Country birding. We decided to check out Bear Island WMA and by coincidence ran into three other SIB members, Bob and Eileen Mercer and Cherrie Sneed! It was a great day with Mary’s House Pond drained to the point where you could have walked across! (Please don’t try that…LOL!!!)

Highlights of the day were 32 Roseate Spoonbills, thousands of peeps that were dizzying to count, including Western and Least Sandpipers, a few rare Stilt Sandpipers, Semipalmated and Black-bellied Plovers, hundreds of Lesser and Greater Yellowlegs, Dunlin, Short-billed Dowitchers and a few Long-billed Dowitchers.

Over 175 American Avocets were on Mary’s House Pond, with some beginning to get breeding color. Throughout the WMA we spotted 100s of Snowy and Great Egrets, along with Tricolored and Little Blue Herons. The first Black-necked Stilts of the season also made an appearance.  A rare Common Goldeneye was swimming with several Buffleheads.  And of course lots of gators, even the gigantic “Brutus” we’ve spotted many times through the years.

But the best bird was a rare Trumpeter Swan, a SC life bird for me and I believe one of the first recorded sightings in SC. The swan was with 3 Tundra Swans, for great comparisons. It was darker, larger and bulkier, but still a difficult ID at considerable distance. Thankfully at least 4 birders took pictures for documentation and we waited patiently for the Ebird reviewers to approve it, which they did! It will now go to the SC record’s committee. The swan was not found in subsequent days, but people are still looking for it. 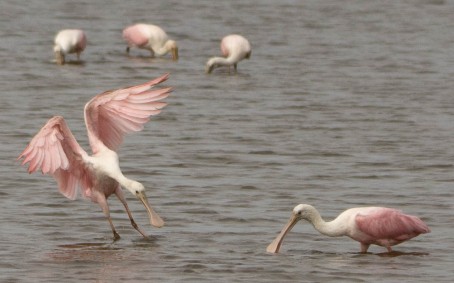 And on the photography side, Ed was in his glory patiently waiting for the Roseates to fly towards him in a channel with the sun to his back. He says the Roseate photo with wings spread is one of his best ever shots! Species counts were in the high 80’s for all of us!  A great day at an always wonderful place. 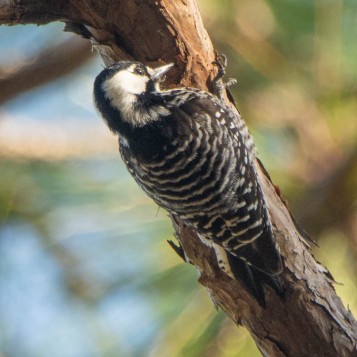 A few days later we ventured north of Charleston to Santee Coastal Reserve.  Our goals were the endangered Red-cockaded Woodpecker and the elusive Bachman’s Sparrow. We had to settle for a very fleeting “now you see it, now you don’t”  look at the sparrow, but Ed finally got a “lifer” picture of the Red-cockaded. Both birds only inhabit very specific areas in SC and often are in the same habitat of open pine forest, with an open, park-like understory of grasses and a few dense shrubs. 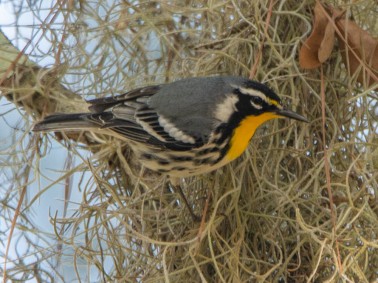 Red-headed Woodpeckers were also active on this beautiful day, and Yellow-throated Warblers singing everywhere! Near the maintenance area, the Purple Martins were very active in their gourd nests.