’Twas a four-course celebration on this second anniversary of the initial Seabrook Island Birders members’ meeting in 2016. There was a migration (birding term) of SIBers and guests into The Lake House for a sold out event with 140 attendees — the first of five SIB evening programs scheduled for 2018. The first course attraction (an activity comparable to the current flow of American Robins stripping trees of red berries on the Island) was an extensive array of cookies, cakes, and carrots which could be washed down with wine.

Now for the entree. Stephen Schabel, Director of Education at the Center for Birds of Prey in Awendaw was introduced for the evening’s presentation. Among his opening comments he said that changes in the global environment, whether it be of climate, human activity, or habitat, tends to affect our birding population first. Birds cannot effect what happens, but they must adapt to those changes or perish. The list of those species which are extinct is long and many more are currently endangered. Then he began his introductions of the five caged birds which he had brought with him.

The first was a Harris Hawk — a bird native to the Southwest and Mexico, but this one had been born in captivity. He noted, as the bird was flying around the room, the typical hawk characteristics of grasping feet (talons), curved beak with overbite, and bi-molecular eyesight. The eyesight is ten times better than that which we enjoy as humans. Female hawks are usually larger than the males and often there is little difference in coloration of feather between males and females. In response to a question, Stephen said all birds have extremely high metabolism and must consume between ten and twenty percent of their body weight in food daily. For this bird, the food in the wild is small mammals. The hawk was encouraged to return to his cage when his dinner, a small dead chicken, was tossed inside.

The second bird, an American Kestrel (formerly known as a sparrow hawk) is the smallest (about four ounces) of our falcons. The three native falcons — also the Merlin and the Peregrine — are very colorful and are fast fliers.  Males and females are similarly colored. The Kestrel often perches on utility lines in areas with open fields as they search for the primary food of insects. That requires good eyesight. Because of their small size, they are also subject to being prey. Cooper’s Hawks will take Kestrels. As part of their protective camouflage, the Kestrel has two black spots, simulating eyes, on the back of their head. Amazing what Mother Nature provides to protect her own. What she cannot do, however, is assure a continuing habitat of open fields for feeding. Therefore, this species is declining in numbers. The Kestrel never left Steve’s hand. 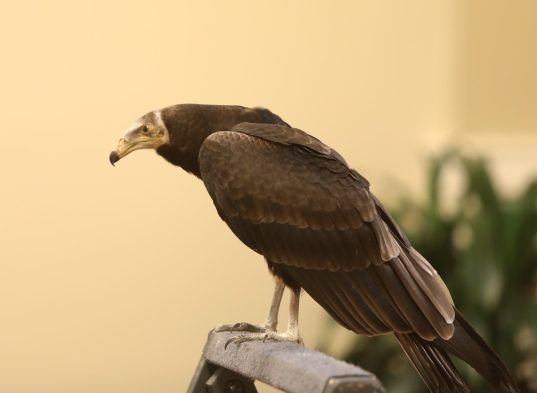 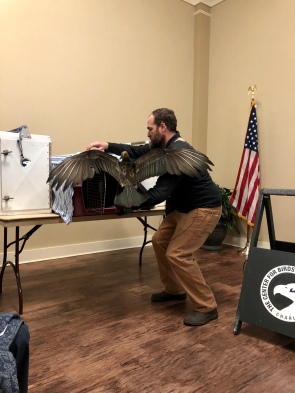 The Lesser Yellow-headed Vulture (a cousin of our Turkey and Black Vultures) was led to the stand and eyed the audience. These birds grow to full size in seven weeks, but are not mature adults until three years of age  — a long adolescent period. Vultures are world-wide scavengers whose diet is road kill and the remains of creatures which have otherwise met their demise. Feathers on their head would get in the way of their food gathering habit, so Mother Nature provided that they have no feathers on their heads. Ugly, but appropriate. Vultures have an exceptional sense of smell which is essential in their search for food. Our bird was in flight around the room and then found a roosting spot on the edge of one of the ceiling light fixtures. It took Stephen several minutes and two or three different tricks to get him down to be recaged. It was mentioned that vultures in general are not doing well because they are apparently being killed by lead poisoning and other ingested items. We should appreciate them. They are one of nature’s cleaners 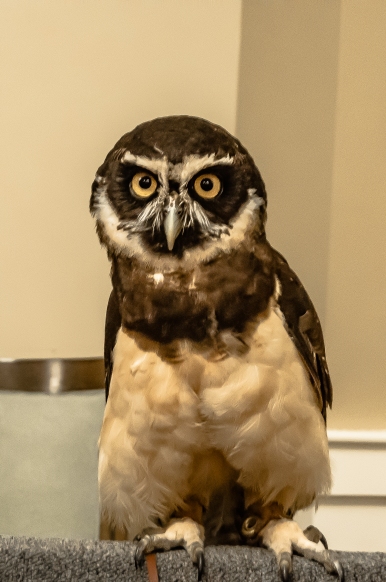 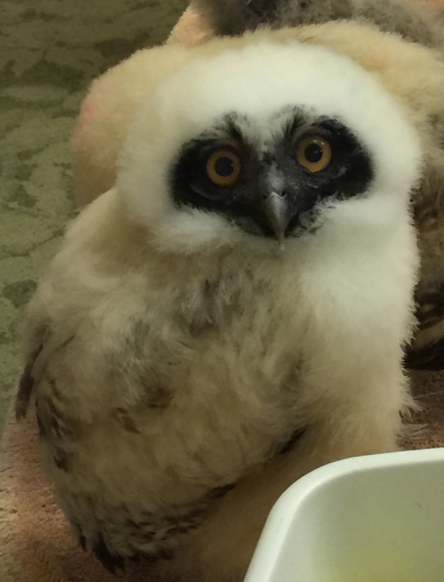 Our fourth visitor was a Spectacle Owl which is a native of South America. Owls are nocturnal hunters with special eyesight who tilt their heads to make full use of the cones and rods within the eyes in their search of small mammals. All owls fly silently due to the particular feather patterns on their wings and thus are able to sneak up on their prey. This bird had free flight around the room and many felt the movement of air as he swooped near their heads in flying from one stand to another. Stephen recalled as he saw our poster advertising the event that this same owl was just a few weeks old on her first visit to Seabrook Island nearly two years ago. As he caged the owl, Stephen reminded us that he had said he brought five birds, but had shown only four.

The fifth bird represented our fourth course — dessert. A young Barred Owl had been brought to the Center after being injured when hit by a car. The bird’s extensive rehab had progressed to a point where it could be released back into the wild. Stephen had brought her with him for that purpose. We were invited to go outside, toward Palmetto Lake, while he retrieved the bird from the Live Oak Hall closet. When he returned, the bird was cradled in his arm and covered with a towel or small blanket. After a few comments during which he invited youngsters in the group to come closer and touch the owl’s tail feathers for good luck, he moved toward the Lake and forward of the anxious crowd. Then he uncovered the Barred Owl and held it aloft.  The bird was motionless for a bit as if meditating. Then, ever so silently, she joined the Seabrook Island community of birds.

Awesome experience and a wonderful way to complete a fabulous evening of birding.