SIB wants to make you aware of an opportunity to take a boat trip to Cape Romain National Wildlife Refuge through Coastal Expeditions, on Sunday February 4, 2018, 8:00 am – 12 noon.  As of now there are still 25 seats available and the cost is $45/person. SIB is not sponsoring this event, but there are several SIB members already signed up.  See description and website below for more information.

As the weather cools and the northerly winds start to blow, birding in the Lowcountry blossoms. Join Coastal Expeditions on a guided birding trip through the estuaries to the northern end of the Cape Romain National Wildlife Refuge in search of migrating shorebirds, songbirds, and birds of prey.

We’ll take you to the hidden spots where long-billed curlew can be found for a chance to see this life list-worthy bird in its native habitat. While we are out, expect to see other extraordinary avian species like peregrine falcons, marbled godwits, whimbrels, marsh wrens and seaside sparrows.

Throughout the year, 293 bird species are classified within Cape Romain, and many of them are seen during the fall migration along the Atlantic Flyway.

This is going to be a very special opportunity for birding in Cape Romain. With close-up views of the historic lighthouses and unmatched scenery, this trip is perfect for photographers, birders, nature-lovers and history buffs. This excursion will take place on board Caretta (We will not be departing onto any islands). SPACE IS LIMITED

Nearly a dozen SIB members are participating in the 2017-2018 Project FeederWatch program.  During a seminar held earlier this week, one of the members asked a great question:

Q:  My backyard is legally ended by a tidal creek that flows in to a marsh behind my neighbor’s house.  The neighbor has a dock.  I know I don’t count birds in flight but if there are birds perched on the dock or in the marsh, should I include them in my counts?  Also, if there are birds scavenging at low tide in the mud of the creek or swimming by on high tide, should they be included?

Since this is an important questions as many of us live on or near marsh, beach, rivers, etc, Judy Morr sent the question to Project Feeder.  Below is their answer:

A: It gets a little tricky counting near water. If any of the birds are attracted to something you provide (feeder, birdbath, plants, stocked fish in a pond etc…), please include them in the count. If you think the birds would be at that location regardless of anything you provide, please exclude them. For example, if a bird is foraging at the tide line or resting at the dock, I would exclude it. However, if ducks come up into your yard to forage, I would include them. I hope that helps.

If you are interested to learn more about Project FeederWatch, please read our BLOG or visit their website www.feederwatch.org  and join today!

It was a rainy and cold 45 degrees this past Thursday December 7th, but five SIB members trooped around the Seabrook Island Maintenance area in search of wintering ducks, shorebirds and passerines!  We were thrilled to see a female Common Goldeneye in the pond along with 14 Bufflehead.  In addition, we saw both the Greater & Lesser Yellowlegs, Least Sandpipers, a group of six Killdeer and a single Spotted Sandpiper with its distinctive teeter, bobbing its tail up and down constantly as it walked along the shore.

In total we saw 36 species in just one-hour, including some new species for the year for some members!  Check out the list of birds and selection of photos below!

Please remember to check our website and sign-up for upcoming events, including any part of our Seabrook Island Big Day on Saturday December 16, 2017.

Article submitted by Nancy Brown and photographs by Charles Moore

As you may know, there is an active bird banding station on our neighboring island.  The following information is a summary of what Aaron Given, Wildlife Biologist, provided on his Kiawah Island Banding Station blog, where you can read the full report.

The 2017 fall migration banding season at the Kiawah Island Banding Station (KIBS) ended on Thursday, November 20, 2017. We banded at two sites on Kiawah Island again this fall:  Captain Sam’s and Little Bear.  This was the 9th consecutive year of fall migration banding at the Captain Sam’s site with banding occurring daily during the last 6 years.  This was the 3rd season for the Little Bear site which we initiated during the fall of 2015.  The two sites are located at each end of island about 8 miles apart (Captain Sam’s on the west end, Little Bear on the east end).  Both sites are situated in coastal scrub/shrub and high marsh habitats, however, the Little Bear site is in an earlier stage of succession. Collectively, we banded 8,393 birds and had 1,845 recaptures of 93 different species at both sites.

Recently, Seabrook Island Birders enjoyed a Bird Walk with a Kiawah Island Resorts Naturalist in the fields around Freshfields and then on another day, a “walk” on Ocean Winds golf course.  A recap of each is below.  More fun activities are scheduled for December.

On November 16, Seabrook Island Birders were honored to have a walk led by two naturalists from Kiawah Island Resorts.  The walk took us to places we usually are unable to bird….the fields behind Freshfields Village.  In the three hours together, an amazing 60 species were identified.  The day started in “Field 14” which is across the Kiawah Island Parkway from Freshfields Village.  We had to wait to enter the field for 9 Wild Turkeys to clear the drive.  Watching them run and fly over the fence in to the plowed field was a treat.

The day only got better when we reached the pond where there were Great Egrets, White Ibis and Wood Storks.   Hooded Mergansers and Buffleheads had also arrived for the winter.    Greater Yellowlegs, Lessor Yellowlegs and Willets shared a pond to allow easy comparison.

When we crossed back to the “tomato fields” behind the car wash, my highlight of the day was seeing the Loggerhead Shrike perched atop a tree.  The day was not over, however, as we continued on to the brush piles behind Andell Inn where the House Wren and Carolina Wren shared a pile, again allowing comparison.  The final stop of the day was the fields behind the pond at Andell Inn.  From the fields, we looked in to the pond where a Common Gallimule was seen.

The day ended as we observed Jake and Juliana capture Monarch Butterflies which they would tag for migration studies.  The number of butterflies was amazing and only expanded our love of beautiful area we call home.

On November 27, Seabrook Island Birders were once again hosted by the Seabrook Island Club at the Ocean Winds golf course.  During this “walk” in golf carts, 32 species were identified.  The day started positively by the observation of numerous Double-crested Cormorants on the pond by the first tee.

The Eastern Bluebirds were not to let their larger friends outdo them so volumes greeted us further down the path.  As the day continued, many of the “normal” species were spotted.  A Green Heron missed the memo to migrate south so was seen on the sixth hole (and another was seen on the thirteenth).  On the back nine, a Pied-billed Grebe was seen and then the highlight of the day was the pond on the thirteenth hole. 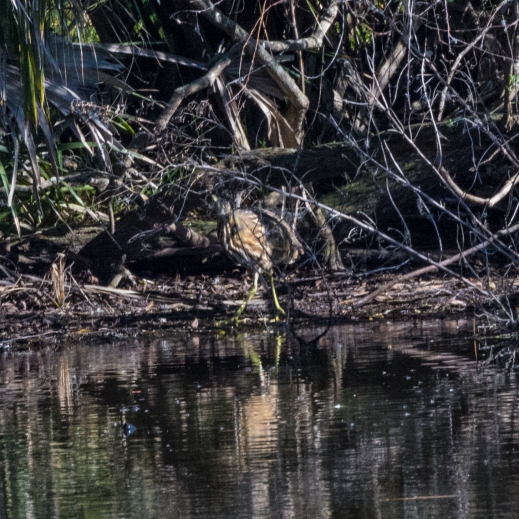 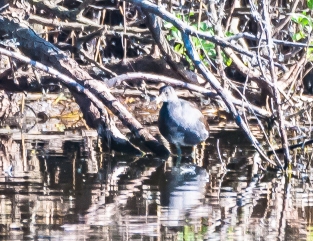 This one pond had the Green Heron, a Common Gallinule, a Pied-billed Grebe and the highlight of an American Bittern.  As we headed back to the club house, a Northern Harrier soared overhead as well as a Bald Eagle.  The Eastern Phoebe, Great Egrets, Great Blue Herons and lowly Carolina Chickadees didn’t stand a chance in winning our hearts.

The species identified in the Fields of Freshfields included: