What we now know about Red knot 9CV:

Felicia is the Shorebird Lead for SC-DNR. On June 28, 2017, she presented to Seabrook Island Birders (SIB) a program of photos and narratives of the fabulous shorebirds that spend time on our beaches. That  program included a discussion on Red Knots. Red Knots, a Federally Threatened shorebird species, use our beach during spring migration as a stopping point on their 18,000 mile roundtrip journey from their winter home on the southern tip of South American to the Arctic Circle where they nest. She mentioned, this spring, the largest known flock with 4,000 Red Knots enjoyed our beautiful and bountiful beaches to rest and feed before their 3-day direct 1,400 mile flight to James Bay in Canada. This is pretty amazing considering there are only an estimated 25,000 Red Knots remaining on the planet! Felicia emphasized the significance of our Seabrook flock, and the partnership with Seabrook Island Birders as we assisted SC DNR in April in tagging Red Knots and placing transmitters for important tracking on their journey.  Red Knot 9CV was one of those birds on Seabrook Island.

Here is a map of that Red Knot’s migration. SC-DNR captured it in Cape Romain NWR at Marsh Island on Oct 16, 2015. A picture, as seen below, was taken at that time and a geolocator was placed on the bird as well as the banding tag.  9CV spent the winter at Cape Romain NWR and then left SC on May 24, 2016 and flew directly to James Bay shore (at the N 50 on the map), arriving the next day! It then continued on to above the Arctic Circle where it stayed for 44 days but did not seem to nest.  On July 16, 2016 it returned to James Bay and was spotted by Canadian researchers! Then, on July 30, it arrived in New Jersey and stayed 55 days. On September 24, 2016 it returned to South Carolina until it was captured on Seabrook, SC on April 29, 2017.  At that time, the geolocator was removed so the data could be analyzed and the bird was released. Ed Konrad was able to take pictures of the bird as it was being released. Felicia wanted to thank Ron Porter who interpreted the geolocator data.  She also wanted to thank the many others, who worked on this project!! 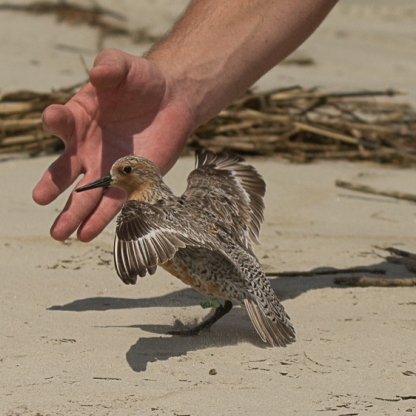 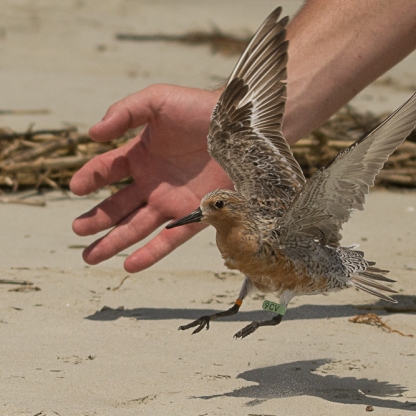 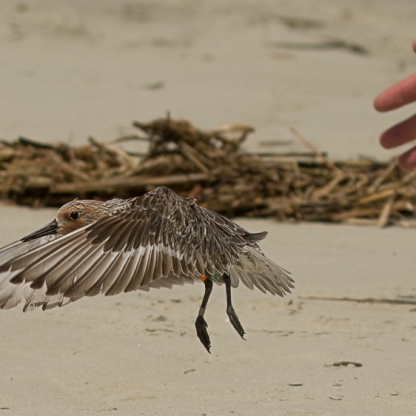 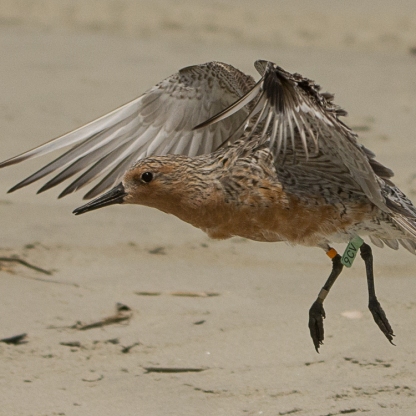 The above photos were taken by Ed Konrad as the bird was being released on April 29th, 2017.

Although this bird spent the winters of 2015 and 2016 in South Carolina, similar information from other Red Knots confirms some birds travel from the tip of South America to the Arctic Circle each year. Their time on Seabrook Island is a time to rest and renourish. As Felicia reminded us in June, human disturbance is one of the top threats to nesting, migrating, and wintering shorebirds. Please remember:

Let Birds Feed & Rest: Resting and feeding are key to the survival of migratory and wintering birds on our beaches. Give them plenty of space. If birds run or fly, you are too close!

Respect Posted Areas: Keep out of posted areas. Disturbances to nesting birds can cause nests or entire colonies to fail. Never walk into the dune areas – Wilson’s Plovers are nesting on Seabrook Island in these areas!

Be a Bird Friendly Dog Owner: Keep your dog on a leash when you see flocks of birds on the beach. Never allow your dog(s) or children to chase birds as it is extremely stressful to birds. And please abide by the “no dogs allowed” past the sign on North Beach. The Piping Plover winter migration is ongoing now.

Please take time to learn and help educate your family, friends, and visitors to Seabrook Island on the importance of protecting and sharing our beach with our wildlife!