Hey everyone! Cross your fingers we have clear skies on Monday, August 21!!!  Unless you’ve been living under a rock, you know the United States will experience a total solar eclipse from coast to coast for the first time in 99 years.  June 8, 1918, was the last time this occurred.

A solar eclipse occurs when the moon moves between the sun and Earth, blocking the sunlight and casting a shadow onto Earth. Keep in mind that the next total eclipse through the USA is on April 8, 2024, and crosses 13 states (Texas, Oklahoma, Arkansas, Missouri, Illinois, Kentucky, Indiana, Ohio, Pennsylvania, New York, Vermont, New Hampshire and Maine), but will not be seen here on Seabrook Island.  We certainly struck it lucky this time, as those of us who will be on Seabrook Island are in the path of almost totality (99%).

Most of us understand what’s going to happen on August 21st, but animals have no idea as they don’t watch the news or read the papers. For animals, the eclipse could be a bewildering experience.

During past eclipses, there have been observations of owls and bats emerging, cows returning to the barn, insects and frogs chirping as in their night time routines, some songbirds went silent and even some Egrets, Ibis and Geese getting so fooled they stop feeding and go to roost.  People have seen bees withdraw to their hives, gray squirrels running into their nests, and mosquitoes and midges starting their evening swarms.

Did you know that during the 1994 solar eclipse in Mexico, observers found that colonial orb-weaving spiders dismantled their webs within one minute of totality and rebuilt them when the sun’s face was revealed.  Off the coast of Venezuela during a total eclipse in 2008, Brown Pelicans and Frigatebirds that had been busy foraging over the water before the eclipse left the bay 13 minutes before the totality and didn’t return until 12 minutes after the entire sun was revealed.

Wild Birds Unlimited published these reactions by birds and wildlife that have been reported to occur during previous total eclipses:

The California Academy of Sciences has launched a nationwide citizen scientist project, calling on participants to closely monitor the behavior of birds, animals and plants during the upcoming eclipse and record their observations using an application called iNaturalist. Because total solar eclipses don’t happen very often, there is little historical data.  Hopefully this year, many “citizen scientists” will observe their surroundings before, during and after the eclipse and document what they see and hear. Flo Foley and Nancy Brown, trained as Master Naturalists through the Charleston County Parks & Recreation program in 2016, will be volunteering to do just that at Caw Caw Monday afternoon. If you are interested in being a citizen scientist on Monday, visit www.iNaturalist.org to learn how you can document your observations of birds, animals and plants.

Let’s all keep our fingers crossed that we have clear skies on Monday to watch this rare astronomical event and observe how nature reacts!

Feeding birds and attracting them to your yard inevitably leads to questions — about feeders, birdhouses, bird baths, baby birds, and more. In this free guide from Birdwatching Magazine, they answer 27 questions about birds in your backyard, including:What types of feeders are best?

A few weeks ago, on July 17, Ed and I visited Sleeping Bear Dunes National Lakeshore in Michigan, where the Great Lakes race of the Piping Plovers nest. We were so excited to see where these special little birds that visit us at Seabrook come from. We also had the pleasure of meeting up with Alice Van Zoeren, who has been monitoring the plovers for the University of Minnesota since 2004. We have been corresponding with Alice through the years, sending her pictures of banded Piping Plovers that we see in winter migration at Seabrook, and she reports back to us where the PIPL have been banded. This information is so important to researchers, to know where the birds are moving.

The Piping Plovers have 3 different “races”…the Great Lakes, the Northern Great Plains and the Atlantic Coast. The Great Lakes group breeds on the beaches of the Great Lakes region from May to early Aug. They lay 4 eggs in a small depression in the dry sand and these eggs are incubated for about a month. The Great Lakes population was once at nearly 800 pairs and has now declined to about 70 pairs that breed in the area. In 1986, the Piping Plovers were placed on the Federal Endangered Species list. 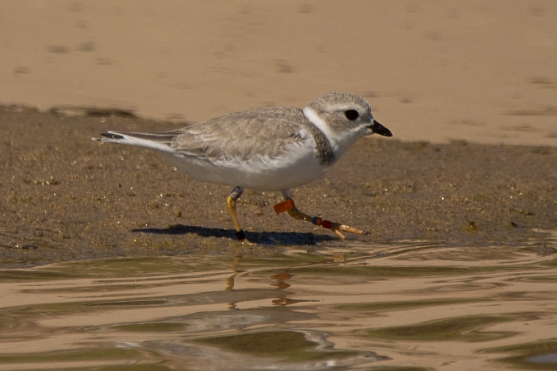 We met up with Alice on the plover breeding grounds on the edge of Lake Michigan. It was a beautiful day and Sleeping Bear Dunes National Lakeshore has to be one of the most beautiful beaches in the US! Alice had counted over 16 plovers that day, including one very tiny young bird that we were lucky enough to see. He was probably 2 weeks old and had so much spunk! Alice said they are independent very quickly. They can run and feed themselves within hours of hatching. By 28 days they have a complete set of flight feathers and are accomplished fliers. 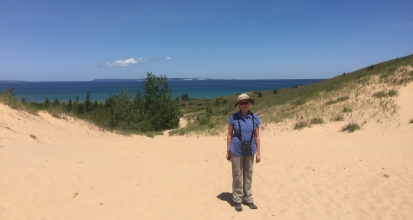 Most of the female adults had already begun migration when we were there, and Alice estimated that they could be in Seabrook well before us. The males will be the next and after that, the chicks. Ed photographed many of the banded birds so we would have a record of them so we can be on the lookout for them when they pass through Seabrook!

We arrived back at Seabrook this past Thursday night, and spotted 3 Piping Plovers on Friday AM, and 4 on Saturday, on our beach!!! Two were banded, one was a Great Lakes bird. We are waiting to hear from Alice in Michigan about it’s origin. 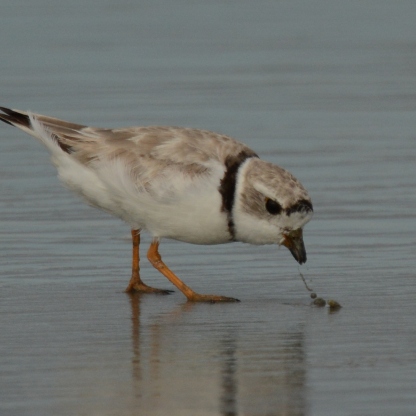 What a thrill it was to see where it all begins!!! Keep an eye out for Piping Plovers at our beaches, beginning now!