On a warm Saturday morning on July 15th, sixteen Seabrook Island Birders enjoyed a Learning Together “Bird Walk” on Crooked Oaks Golf Course which was closed for annual summer maintenance.  The Club graciously gave us access to not only the course but also use of carts for the outing, which helped to beat the heat of the July morning.  Due to the size of the group, the Birders split in to two groups with one going forward on the course and the other going backwards.  Each group had members with cameras to capture some of the birds seen. 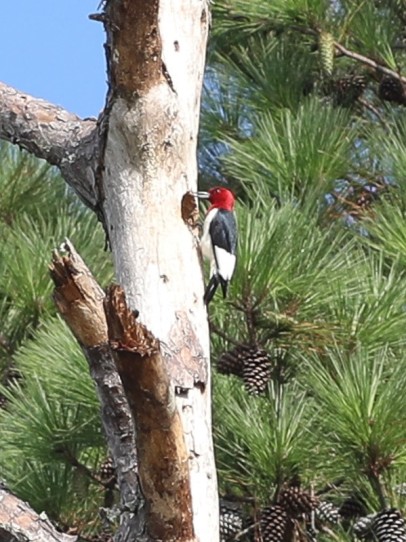 The two groups met on the eleventh green where the Red Headed Woodpeckers have a nest in a dead pine. Each of our photographers captured the birds for prosperity while Charley Moore was able to catch them in their mating dance.

Since both groups were on the course at the same time, it would be expected the sited species would be very similar.  The group starting on the first hole saw 21 species.  The group starting on 18 saw 25 species. Only 15 of these species were the same for a total of 31 species.  Even with seeing so many birds on a  warm morning, neither group saw some common birds such as Turkey Vultures, Painted Buntings or Mourning Doves.  It proves that birding is always an experience in being at the right place at the right time.

A highlight for both groups was the Mississippi Kites which perched for the group and continued to fly by so we could see their grace as they dove to catch insects while in flight.

It must have been breakfast time for the birds as in addition to the Kite, an Osprey was seen eating a fish and a proud Eastern Bluebird had a lizard. 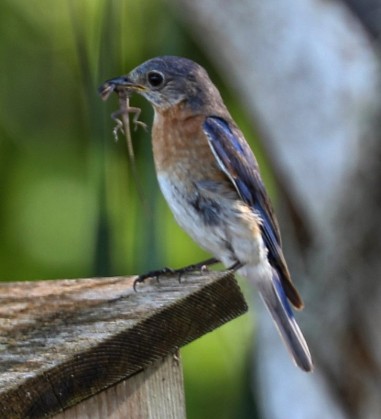 It was a great morning to Learn Together and enjoy some of the wonders of Seabrook Island.  Thanks to the Seabrook Island Club for making this possible.