Recently, we had a mini-version of SIB converge in Ohio! While we did not see each other, we were all there at almost the same time. Nancy Brown and Flo Foley were on a 12-day Wings Birding Tour, Judy and Dean Morr visited family for Mother’s Day in Mercer County and Ed and I did an impromptu trip, on our way home from a family visit in NY, to iconic Magee Marsh and surrounding area for the Biggest Week in American Birding festival for the migration of warblers. 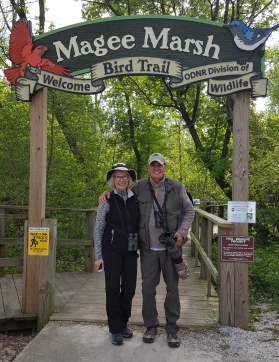 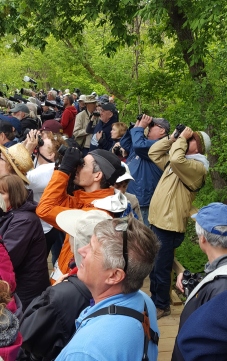 Ed and I arrived on a cold, windy, drizzly day and the birding was spectacular! Magee Marsh is a thin strip of land where the migrating birds stop to rest in their migration from South and Central America across Lake Erie into Canada and points north. I had heard about the festival previously, but until you see the spectacle of thousands of birders with their binoculars and cameras stalking totally oblivious warblers on a mile long boardwalk, you would not believe it. It was quite a show and often times all you heard was the sound of camera shutters going off. The hungry birds were close and plentiful, a photographer’s and birdwatcher’s dream.

Ed and I found 27 warbler species on the whole trip in MD, NY, OH, KY and TN and we got many spectacular photos! Highlights were the Blackburnian, Magnolia, Nashville and Bay-breasted, which are all pretty difficult to find in SC during migration. Yellow Warblers were like gnats in OH, seemingly everywhere, even one on nest! At one point we had 6 Rose-breasted Grosbeaks in one tree. It’s an event not to be missed and if you ever have a chance to go, take advantage of it.

When I moved from Ohio 35 years ago, I wasn’t in to birding.  In preparation for my Mother’s Day visit, I used eBird to give me some information:

Since eBird doesn’t provide email address of participants, I used Google on the person’s name and town. BINGO!  The second “result” was an article from the local newspaper with headline: “Love of birds pays off for local teen”.   A 14 year-old boy had come in runner-up for the second consecutive year in a national photography contest for birders.  I found the mother on Facebook so I messaged her with my name and asked if her son would be willing to go birding with me to show me his favorite places and birds.  Being a small town, I suspect she recognized my unusual last name.  She immediately responded that he would be honored.  Long story short, they live down the street from my in-laws and the boy’s maternal grandfather was a golfing friend from 35 years ago.  When we talked to finalize our outing, the mother asked if her 14 year old son could accompany the now 16 year old.  I had a date with two young gentlemen!

The birding was great too!  On the way to the grocery on Saturday, I stopped by the ball field that was one of the Hot Spots.  In just a few minutes, I saw seven species, three which were on the earlier mentioned Target Species (Solitary Sandpiper, Nashville & Magnolia Warblers).

My teenage guides were terrific.  They discussed the best places to go based upon my target species list and decided our itinerary.  The second stop was the jackpot!  In less than 2 hours, I added 8 birds to my life list (Warbling Vireo, Veery, Gray-cheeked Thrush, Swainson’s Thrush, and Tennessee, Mourning, Bay-breasted, Chestnut-sided Warblers).  I also re-saw two of three from Saturday.  The list was 62 birds, including 16 warblers.  It was definitely Warbler Week in Ohio.  Due to our fun at the second site, we had to skip the last site so the boys could get home in time to mow the yard.  The father greeted us upon our return and invited me to call the next time I came to Ohio.  I plan to do so!

This is our third bird tour with Wings Birding Tours Worldwide.  This tour, “Spring Migration in the Midwest,” is lead by Jon Dunn, a lifelong birder who is co-author of the 6th and upcoming 7th National Geographic Society’s Field Guide to the Birds of North America, among other books and videos. The trip accommodates only seven participants and is such a popular trip, we booked it a 1 1/2 years in advance!  The major goal for most people who take this trip are the Eastern Wood-Warblers.

We met our group in Florence, Kentucky on May 10th and began birding that afternoon by visiting Capability Farm in Versailles, Indiana.  This 400 acre farm began a conversion into quality wildlife habitat six years ago and it was a fabulous place to bird with numerous habitats! We traveled through Kentucky looking for several specific birds we may not see in the more northern territory of our trip, like the Swainson’s Warbler and the Henslow’s Sparrow, both life birds for us.  We spent two nights at the Shawnee Lodge in southern Ohio before traveling north through Columbus to spend three nights near Ottawa National Wildlife Refuge, Crane Creek and Magee Marsh.  What an amazing area!  We arrived at the end of the festival so we avoided most of the crowds seen by Ed & Aija earlier that week. We added another five life birds to our list in this area (Connecticut Warbler, Cape May Warbler, Philadelphia Vireo, American Woodcock & Black-billed Cuckoo).  And we’ll always remember standing in the parking lot looking into the sky to watch hundreds upon hundreds of Blue Jays migrating past.  We counted at least 2,000 birds in less than 30 minutes!

Our group continued north for three nights in Tawas City, Michigan. Besides our first Greater Scaup, we were thrilled to identify a Fork-tailed Flycatcher at Tawas Point State Park.  This migratory tropical bird is from southern South America and seemed to make a major error in navigation to end up in northern Michigan.  Our final destination was to Mio, Michigan for hopes of seeing the endangered Kirtland’s Warbler.  With approximately 5,000 birds remaining, it has a very specific habitat nesting in dense young Jack Pine forests growing on a special type of sandy soil. Visit the USFWS site to learn more about this fascinating bird. We got great views of several males and a female Kirtland’s Warbler.

In total, we saw 216 bird species on our trip including 10 life birds and ALL 38 Eastern Wood-Warblers.  In addition we saw numerous mammals, reptiles and butterflies. Our group of eight people got along fabulously riding more than a 1,000 miles in a 12-passenger van to see birds of a life time. Jon was an outstanding guide with expert knowledge and friends in every corner who would assist with locating birds for us!  At times, it was truly a successful “wild goose chase” (or more accurately, a Wood Warbler chase)!

As you can see, there are many ways to bird! You can bet all of us always travel with a pair of binoculars and often research the birds that will be common in an area before we arrive, even if birding isn’t the primary reason for our trip!