Who have packed their bags and are leaving for cooler summers up north?

We are all familiar with the common Northern Snowbird that arrives in early winter with their faded tans, rumpled shorts and out of state license plates. You might be interested to note that there are plenty of true winter birds that enjoy our mild winters as well and come to visit and feed in our backyards for the duration. These birds are now beginning to pack their bags and are ready to head north as spring promises them better feeding opportunities and a gentler climate.

Living on Mallard Lake, I enjoy welcoming members of the duck families that show up in late November but they have already headed north. This year we enjoyed hosting families of Buffleheads who also reside on Palmetto Lake. The males have a mostly white underbelly with a large white crown extending from the eyes to the back of their necks. A similar bird very common to our area are the Hooded Mergansers. They are different than the Buffleheads in that the males have a crest which they can raise or lower as a display of their attractiveness to the female Hooded Mergansers, whom nature shortchanged on the attraction scale. Do you ever wonder why it’s only the human population where the female species are considerably more attractive than the male species? As a balding 70 year-old man, I would trade anything for something as grand as the white crest of a Hooded Merganser but I think that Trump beat me to it. In addition to these two common birds seen on Seabrook Island, we also have a frequent winter visitor called the Lesser Scaup. They are more often found inland but like many ducks, they are fine divers and feed on plant and animal materials which are still plentiful during the winter here. In the summer the Lesser Scaup and the Bufflehead will fly as far north as Alaska to escape the summer heat. The Hooded Merganser on the other hand chooses to stay in the Great Lakes area and southern Canada. 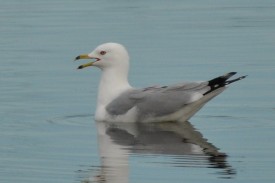 In addition to the ducks that we see on our lakes and ponds, we also have many shorebirds that enjoy their winters here and then head north as far as Alaska and the Hudson Bay in Canada. The Least Sandpiper is the smallest of the North American Sandpipers and is one of the smallest waders in the world. They are about 6” long and have a white underbelly and streaked brown and grey upper-parts with a slender straight dark bill. The Dunlin is also seen frequently on the beach in the winter where they forage for insects, larvae and small crustaceans in tidal pools by the sea. The Dunlins must hate the heat of summer as they migrate almost all the way to the northern polar cap in the summer. Among the gull family that head to cooler climes in the summer are the Bonaparte’s Gull and the Ring-Billed Gull. The Ring-billed Gull is fittingly named due to its black band located just behind the tip of his bill. The Bonaparte’s Gull was named after a French zoologist who was a nephew of Napoleon and is less common than the Ring-Billed Gull. It is one of the smallest gulls found in this area. 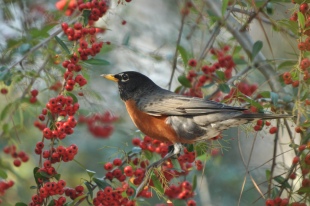 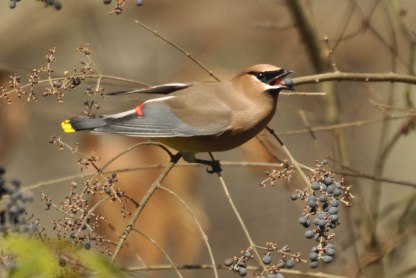 Finally, that leaves us with the winter visitors that we see often on our backyard feeders and are heading north for more organic delicacies available from Mother Nature. On the woodpecker spectrum is the Yellow-bellied Sapsucker which has a hardly noticeable yellow belly (go figure) but both a red cap and a red throat to distinguish itself from the Downy and the Hairy Woodpeckers. Other common birds that you won’t be seeing after May 1 will likely be the American Robin, Savannah Sparrow, Song Sparrow, and the Cedar Waxwing. But don’t worry, they have leases on the Island commencing around Dec. 1 so you’ll see them again!