Anhingas roost in trees over water or on platforms, and on Seabrook, they are often solitary. They are about 35″ long and have a 45″ wing span. They are sometimes called the “snake bird” since they swim completely submerged with only their head exposed. They spear fish with their very pointed, long, thin and straight bill. They have a long, fan-shaped tail when perched, long pointed wings and a long neck. The most striking part about them is the whitish-silvery upperwing pattern which makes them look like they are wearing a snazzy jacket! If you see this pattern on the back of a large dark bird, it’s an Anhinga. The females have a velvety-buff upper body, as do the juveniles (until the 3rd year). The Anhinga has a striking blue-green eye ring in breeding plumage. Anhingas nest in small colonies, often with herons or egrets. They eat fish, frogs and often newly hatched alligators.

Double-crested Cormorant are nearly the same size, 33″ long  with a 52″ wing span. They are very common birds on Seabrook, often perched on the lake platforms or in large groups swimming in the inlet at North Beach. They may form large flocks and when we see them in flight, often flying in a large “V” formation. Their bills are orange, curved, hooked shaped, and thicker than an Anhinga. They use them to scoop and grasp their prey. Juveniles can also have buffy breasted color variations. Cormorants have a striking crystal like blue eye and a yellow-orange face patch. Cormorants nest in large colonies and are fish eaters.

Both birds do not have oil glands so their feathers are not water repellent. This lets them move more easily underwater for foraging.  That’s also why you often see them drying their non-waterproof wings spread open, when perched. Both birds make low nasal frog-like grunts. So a quick tip is this:

If you would like to learn more about these birds visit: 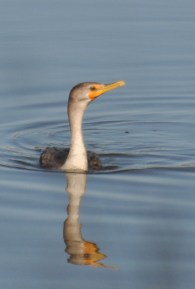 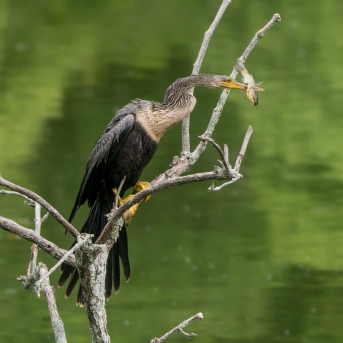 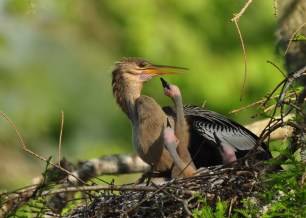 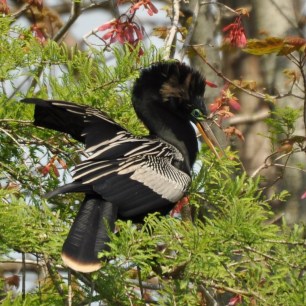 Article submitted by:
Photographs provided by: