The American Oystercatcher is a large, boldly patterned bird we see at our beach and in salt marshes. It doesn’t appear in large groups, but is often seen in solitary pairs. As indicated by it’s name, it feeds on oysters, clams, mussels and uses it bright orange-red bill like an oyster shucking knife to open it’s prey. They also probe for and stab shellfish or they carry loose shells out of the water and hammer them open with their bills.

The oystercatcher has a large black head and a large red bill. It’s back is dark brown and it’s underside is white. It has stout, dull-pink legs and a bold white stripe in it’s wings and rump when in flight. When they fly, they call loudly in a whistled “wheep.”

Oystercatchers are usually in small numbers and fairly solitary or in small family groups. Cape Romain, up the coast, has the largest wintering population of oystercatchers in the world. One winter we observed a group of 93 near the oyster beds by the Kiawah River Bridge! There are several thousand in the US and most of them breed in the Mid-Atlantic. They are an “indicator species”. This means that they can only thrive in estuaries where the water is clean. If you have a healthy population of oystercatchers, then you have oysters and the water is clean.

Oystercatchers are shy birds and sensitive to human disturbance. Their nests are a scrape in a shallow depression on the sand just above the high tide line. They line it with shells, pebbles and tide wrack and lay 1-4 eggs. Solitary pairs are known to nest at Deveaux Bank. Recently, SC DNR banded 2 young birds at Botany Bay plantation, a first at that location for the banders!

An interesting Seabrook fact is that for the past four years there has been a banded oystercatcher on our beach “U5”. We have seen him on many occasions, as have other bird watchers, and it is always fun to see that he is still around. He was banded at Little Egg Island, GA, just north of Little St Simons Island. You can observe U5 usually near the “highway” between the protected area and the cut. 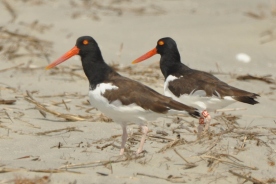 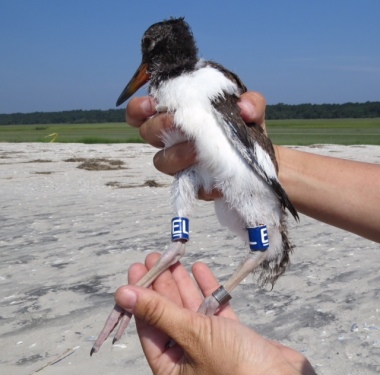