Brown Pelicans are a very common site on Seabrook Island all year long. This large bird is commonly found on our island flying over the dunes and beaches in V-formations or single file, flapping and gliding in unison. Sometimes you even see them coasting just inches above the water. While in flight, pelicans hold their heads drawn back on their shoulders. Have you ever seen them feed? It is a fabulous site! They drop from the air sometimes as high as 60 feet and plunge dive head first into the water and scoop and trap their prey in their extended pouch. Then they drain the water out the sides of their bill and now are left with a tasty catch of fish usually either herring, sheepshead, mullet, pigfish, minnows or pinfish. Adult Brown Pelicans consume as much as four pounds of fish per day. Ever wonder why the pelican doesn’t get hurt during these plunges? Well, air sacs beneath the skin on their breasts act like cushions to protect them during impact. They also rotate their body ever so slightly to the left. This helps to avoid injury to their esophagus and trachea which are located on their right side.

The Brown Pelican adult has a gray-brown body with white and pale yellow head and a long bill (11-13 inches) and an expandable throat pouch that can carry nearly 3 gallons of water and/or fish. The back of the neck turns chestnut in breeding season. Males and females look similar in color however males are slightly larger. Pelican bodies are large and heavy, they have short legs and webbed feet. Their wings are long and broad. Juveniles are all brown at first then change gradually to adult plumage.

Brown Pelicans are very gregarious birds. Both males and females live in flocks throughout the year. They are exceptionally buoyant due to internal air sacks beneath their skin and in their bones.

Their nests are large and flat and made of grass, straw and sticks and built in a tree or if on the ground the nest consists of a shallow scrape lined with feathers and a rim of soil. They lay 2-4 white eggs and incubation ranges from 28-30 days and is carried out by both parents. They incubate their eggs by covering them with their webbed feet. Brown pelicans are monogamous (have only one partner) throughout the breeding season and nest in large colonies.

The oldest brown pelican on record was 43 years of age.

A group of Pelicans has many collective nouns, including a “brief”, “pod”, “rush”, “pouch”, “scoop” and “squadron” of Pelicans.

The Crab Bank Pelicam, just off Mount Pleasant in Charleston Harbor, brings you live video of nesting pelicans.  You will also hear the low grunts typical in a colony.

Brown Pelican coming in for a landing – Ed Konrad 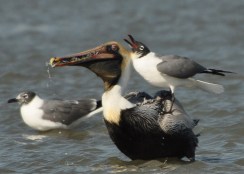 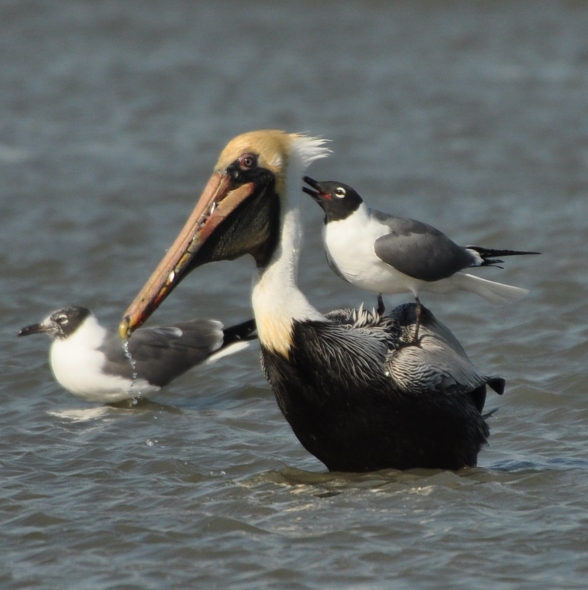 Brown Pelican enjoying the leftovers after the dolphin strand feeding!

Submitted by Flo Foley and Photographs by Ed Konrad